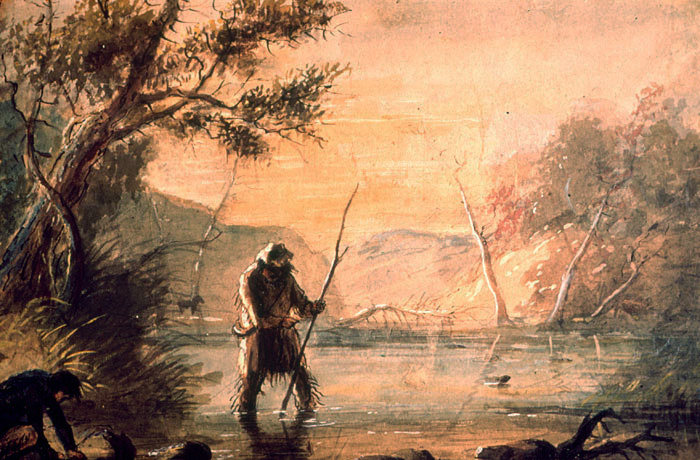 Image of AJM painting: Trapping Beaver: Exterior wooded scene of two trappers preparing traps to place in a stream. One of the men is played as an experienced trapper and the other is a "greenhorn" anxious to learn the skills and art of beaver trapping.

Scene Summary: Narrator introduces fur trappers and their work, as images describe trappers at work and the two characters take center stage. The two characters engage in a short dialog before demonstrating trap setting techniques. The scene ends with a Tableau Vivant of the image, "Trapping Beaver".

Narrator, Male: "After the Lewis and Clark Expedition of 1804 to 1806, trappers ventured west. By 1822, free trappers and company men were trapping the beaver-rich steams of the Rocky Mountains. Many Americans regarded the land of the Louisiana Purchase as theirs. American Indians felt the land was theirs because of their long-term possession."

Trapper 1: "We'll make the beaver come to medicine. There's plenty of them here. Let's get to setting our traps."

Trapper 2: "And let's be sure to keep the Blackfoot away from our top knots while we're at it."

Joe Meek, Narrator: "The manner in which the trapper takes his game is as follows: He has an ordinary steel trap weighing five pounds attached to a chain five feet long with a swivel and ring at the end which plays around what is called the float-a dry stick of wood about six feet long. The trapper wades out into the stream, which is shallow, and cuts a bed for the trap five or six inches under water. He then takes the float out to the center of the stream and drives it into the mud. A small stick or twig, dipped in musk or castor, serves for bait and is placed so as to hang directly above the trap which is now set. The trapper then throws water plentifully over the adjacent bank to conceal any foot prints or scent by which the beaver would be alarmed and, going to some distance, wades out of the stream." Joe Meek, Trapper