The material in this section describes the Three Worlds Meet theatrical and scholarly presentations that took place during the Green River Rendezvous Days in Pinedale, Wyoming on July 11-13, 2013.

Updates to this section include:

Imagine life-size dramatic recreations of the western paintings of Alfred Jacob Miller.
Then imagine the thoughts and actions of the characters coming to life
presented with rich narration and action... 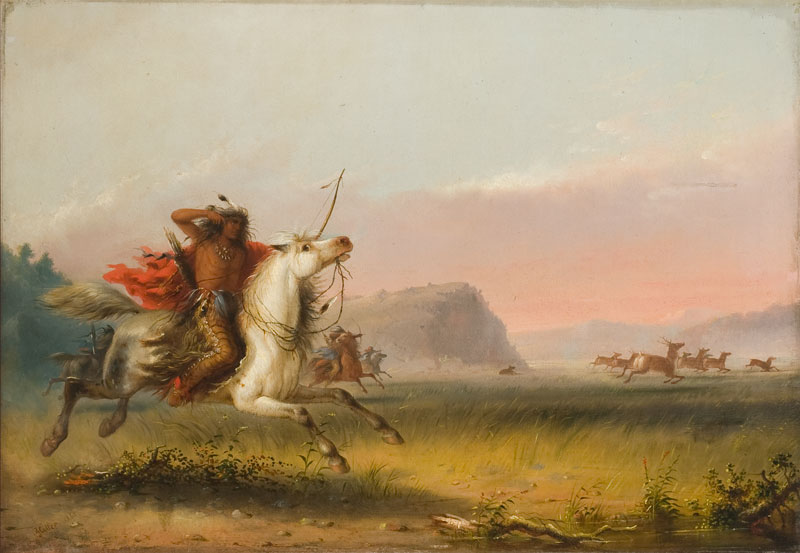 The Three Worlds Meet project brings selected sketches and paintings of Alfred Jacob Miller to life through the "magic" of tableaux vivants. Popular through the ages, tableaux vivants use costumed actors properly positioned in sustained poses to imitate particular art pieces. The Three Worlds Meet production will be staged with an ensemble of historical interpreters and character actors during the Green River Rendezvous Days in July 2013 as an activity of the Museum of the Mountain Man in Pinedale, Wyoming.

Three Worlds Meet is based on rigorous scholarship that uncovers the culturally different understandings of environment, gender, exchange and value among participants in the rendezvous. The scripts feature the words of Alfred Jacob Miller and William Drummond Stewart with those of rendezvous entrepreneurs like Warren Ferris, Joe Meek, Osborne Russell, Nathaniel Wyeth and others. The narration also includes authoritative, explanatory comments regarding American Indian cultures, fur trade history, art history and more.


Special thanks to the Pinedale Fine Arts Council and Pinedale High School,
Sublette County School District #1, Jay Harnack, Superintendent.
The Three WorldsMeet production was supported, in part,
with funding from the following contributors:

A three-day schedule of informational presentations by nationally renowned historians, artists and anthropologists will complement the Three Worlds Meet production. The final cast of presenters will have garnered the distinction of having their research and writing included in the prestigious, annual edition of The Rocky Mountain Fur Trade Journal which is published by the Museum of the Mountain Man. Descriptions of each of the four articles that have direct reference to Alfred Jacob Miller, William Drummond Stewart and the situation of the Green River Rendezvous of 1837 follow in the introduction from the Rocky Mountain Fur Trade Journal, Volume 7, 2013.

The following material is excerpted from the Introduction written by Jim Hardee, Journal Editor, for The Rocky Mountain Fur Trade Journal, Volume 7, 2013

Three Worlds Meet animates selected Miller paintings by staging tableaux vivants, costumed actors in sustained poses that imitate well-known artworks. The Three Worlds Meet script connects the tableaux through a narrative based on writings by Miller, Stewart and various trappers. It also incorporates the language and culture of Native Americans.

The program complements this volume of The Rocky Mountain Fur Trade Journal, which includes four articles or essays touching on aspects of Stewart's life and the historical legacy of Miller's artwork. These items were contributed by participants in the Three Worlds Meet project.

Back issues of The Rocky Mountain Fur Trade Journal are available from the Sublette County Historical Society for $25 each plus postage. For more information, call 877-686-6266 or 307-367-4101 or purchase on-line at www.mmmuseum.com/tradingpost

Pertinent to this history, public presentations will also investigate and summarize the recently acquired letters of William Drummond Stewart, William Sublette and others at the Museum of the Mountain Man. Other source documents from Murthly Castle will be investigated. Speakers will describe how the three worlds were influenced by the exchange of cultures using academic discussions, living history demonstrations and interpretations, special exhibits and demonstrations of sign language and other non-verbal communication.